The Battle of the Hemispheres - Challenge 1

Batman v Superman, Sega v Nintendo, Blur v Oasis...there's a list of rivalries that we may never be able to answer but in a week when one of rugby's greatest rivalries will have a victor, with Ireland facing off against England in Twickenham for their Grand Slam decider, we thought we'd resolve rugby's other age old debate, who's better; The Northern Hemisphere or The Southern Hemisphere.

With a little help from our friends at Leinster Rugby we enlisted Noel Reid and Rory O'Loughlin to represent The Northern Hemisphere and James Lowe and Jamison Gibson-Park to defend the honour of The Southern Hemisphere.

Our referee for the day, comedian and Nigel Owens wannabe, Gary Cooke, set the guys three challenges to test their parking prowess, agility, and kicking skills in a bright but cold morning in Suttonians Rugby Club, .

Watch the first challenge video below to see who will be crowned champions and who would be left on the scrapheap. 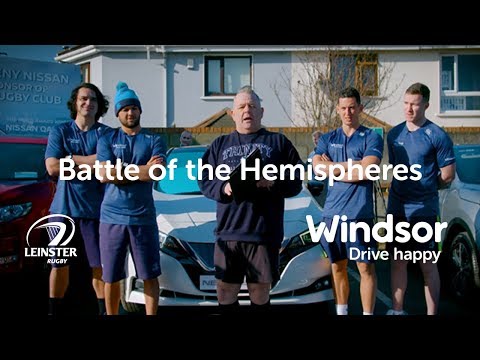 Is your car ready for the scrapheap? Why not upgrade to a brand new 181 Nissan and avail of up to €5,500 scrappage?

Back
Book A Service
Vehicle Valuation
Compare Saved Vehicles
Top
Close
Your Cookie Settings
Select your cookie settings
Strictly Necessary Strictly Necessary cookies are essential to let you move around the website and use its features, such as accessing secure areas, shopping baskets and online billing. These cookies allow our website to provide services at your request.
Functional Functionality cookies are used to remember the choices you make, e.g. your user name, log in details and language preferences. They also remember any customisations you make to the website to give you enhanced, more personal features.
Targeting Targeting cookies collect information about your browsing habits to deliver adverts which are more relevant to you and your interests. They also measure the effectiveness of advertising campaigns.
Save Settings
Cancel Changes

Your settings will take affect when you refresh the page or move to a new page. Find out more about cookies