Windsor Motors hosted the launch of our new Flagship Renault and Dacia showroom in Airside Retail Park on Thursday, November 29th. The Airside showroom is Windsor’s second Renault and Dacia dealership, having launched our Galway location earlier in the year.

The panel engaged in lively debates and discussions about Irish sport, including the fantastic successes of Irish rugby in 2018 and the new laws being introduced to the GAA, as well as taking some questions from the packed audience of sports fans.

There were also some great prizes given away on the night. Leinster Rugby Star and Windsor Brand Ambassador James Lowe was in attendance to chat to Marty, answer some questions from the audience, and do the raffle draw for Leinster prizes. The draw saw some happy faces take home prizes including a signed Leinster rugby ball, signed Leinster Jersey, and Leinster Rugby tickets. 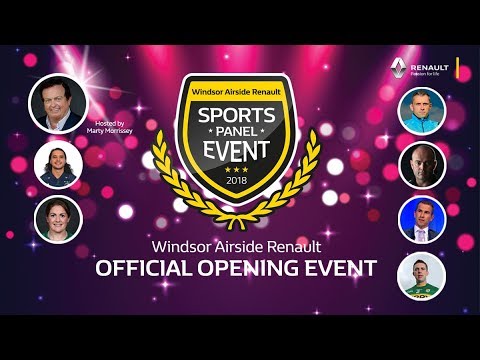 The big prize on the night, though, was won by North Strand-native Audrey Dixon. Having taken a test drive of a Renault Clio earlier in the month, Audrey, along with 20 others, was entered into a draw to win a brand-new Renault Clio. Selecting the lucky box with the keys inside, Audrey unlocked her brand-new Clio to win big on the night!

Windsor Airside Renault and Dacia is the new home of Renault and Dacia in North Dublin, employing 30 people and boasting a state-of-the-art facility in Airside Retail Park. The huge showroom houses a large range of new and used Renault and Dacia cars including the Renault Kadjar and the All-New Dacia Duster. The Dealership also caters to the LCV market with a range of Vans and commercial vehicles and boasts a large Service Area with a team of highly-skilled Renault technicians. The facility is run by Dealership Manager Chris Hanlon, who has worked with the Windsor Motor Group for more than 15 years.

Come down to Windsor Airside Renault and Dacia, the new home of Renault and Dacia in North Dublin, to view our extensive range of cars and commercial vehicles, book a test drive, and see how you can Drive happy with Windsor.

Back
Book A Service
Vehicle Valuation
Compare Saved Vehicles
Top
Close
Your Cookie Settings
Select your cookie settings
Strictly Necessary Strictly Necessary cookies are essential to let you move around the website and use its features, such as accessing secure areas, shopping baskets and online billing. These cookies allow our website to provide services at your request.
Performance Performance cookies collect information about how you use our website e.g. which pages you visit most often, and if you experience any error messages. They also allow us to update our website to improve performance and tailor it to your preferences. These cookies do not collect any information that could identify you - all the information collected is anonymous. They will not be used to target adverts to you on other websites.
Functional Functionality cookies are used to remember the choices you make, e.g. your user name, log in details and language preferences. They also remember any customisations you make to the website to give you enhanced, more personal features.
Targeting Targeting cookies collect information about your browsing habits to deliver adverts which are more relevant to you and your interests. They also measure the effectiveness of advertising campaigns.
Save Settings
Cancel Changes

Your settings will take affect when you refresh the page or move to a new page. Find out more about cookies